The Troll Shebang: A Comprehensive Narrative on Internet Trolling

A troll is an agent of chaos. Their community is marked by baseless attacks on anything from their target’s political standing or ethnicity as well as exacerbation of existing conflict for their own amusement. A troll can pose a significant threat for an inexperienced Internet user, who is much more likely to fall into one of their traps.

Trolls have existed since the beginning of the Internet. Whitney Phillips in her extensively researched book This is Why We Can’t Have Nice Things describes the presence of troll activity all the way back to “Usenet—a distributed, worldwide discussion board system first introduced in 1980”(Phillips 16). Since then trolls have continued to wreak havoc and impede the formation of productive online communities. As trolling became more widespread and the Internet became more advanced and accessible, a series of studies were conducted on the practice. A notable study, “Trolls Just Want to Have Fun,” conducted by Erin Buckles, Paul Trapnell, and Delroy Paulhus in 2014 identifies characteristics in trolls directly linked to sadism, psychopathy, and Machiavellianism. That is their enjoyment in the pain of others, the dissociation of emotion, and an interest in exploiting, manipulating, and deceiving others. These findings do not come as a major surprise, Internet trolls are infamous for their callous and tasteless attacks. Phillip’s extensive interviewing of troll community lead her to the conclusion that “trolling is … framed by trolls in explicitly pedagogical terms. Maybe next time, trolls argue, the target won’t be so stupid. Maybe next time they won’t be such obvious trollbait. In this way, trolls are—at least in their own minds—doing their targets a favor” (Phillips 26). The notion held by trolls that they are doing their targets a favor coincides with the findings of Buckles et al. linking trolling to narcissistic tendencies. By framing their actions as helping their targets trolls shield themselves from their actions. Despite trolls presence since the creation of the Internet, some people still remain blissfully unaware of the presence of trolls.

In order to gain an understanding of the overall awareness of what trolls are, two separate interviews were conducted with fellow Washington and Lee first year students. One of these students described themselves as “uncultured” when it came to the Internet, and the other considered themselves “informed.” Each student was asked a series of questions, the answers to which were recorded. One in the form of a transcript and the other using a voice recording application.

Interview with self described “uncultured” subject, referred to as “Nestle:”

Nestle was then shown an example of trolling from the twitter user @CurvedDaily, included here: 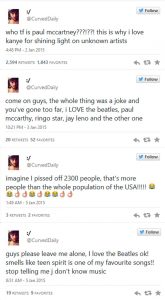 Next, here is the audio of an interview from the “informed” student, who asked to be referred to as SWAH:

The difference in experience is clear, and a strong argument can be made that Nestle would be more easily trolled than SWAH. Nestle is obvious “Troll Bait” and as discussed earlier many trolls would consider it their duty to troll Nestle in order to educate her.

As stated earlier trolling is widespread among all Internet communities. It permeates Twitter and YouTube but it most widely spread among messaging boards. Internet users such as Nestle (the subject of the first interview) are particularly vulnerable to trolling attacks. For the purpose of this article a short video has been made describing several methods to identify a troll.

That video is an example of one of the most famous troll methods, the “Rick Roll.” Rickrolling videos often start out rather innocently and then feature an unexpected appearance of a clip from the music video for the Rick Astley’s 1987 song “Never Gonna Give You Up.” Rickrolling is an extremely easy way to troll somebody, so often times very little effort is put into the part of the video leading up to the music video clip. In the video above, there is an obvious spelling mistake in the first slide of the video as shown below.

Noticing these things early on in the video may shield you from the surprise. Another common marker for a rickrolling video is a stock video of waves crashing on a beach.  However, the trolling community has largely moved away from rickrolling, which is a very harmless example of trolling. Trolling can also come in the form of comments on videos or message boards. These comments can be identified as well, but it takes a well trained eye. Many troll comments often make grandiose and absurd statements specifically crafted to target a response from a particular group. For example, a troll may comment something such as “Wait the Earth isn’t flat??” on an astrophysics board. Since a troll’s goal is to simply get a reaction from whoever they are targeting comments such as these can be easily isolated. However they can sometimes be much more difficult to identify. For this reason “the existence of trolls, even the possibility of the existence of trolls, makes community members far less likely to trust outsiders or to tolerate those who haven’t yet mastered the community’s norms”(Philips 16). Not only do trolls incite paranoia but they also shut down channels of communication on the Internet, specifically when it comes to websites dedicated to scientific research.

Trolls and the Scientific Community:

The Internet has had a profound impact on the scientific community. It has provided scientists with a platform to communicate with each other as well as the public. However, the Internet is infested with trolls, and “the scientific community has quickly become a typical target of trolling” (Manella 1). It is quite easy to think that if there is any community more or less safe from trolls it would be the scientific community. As SWAH said in his interview “If there is scientific evidence and people are trying to speak against it that’s just dumb.” However Manella argues in their article “Science and Social Media: How to Avoid Feeding the Troll and Save your Time” that trolling can easily damage science. Due to the offensive nature of troll’s comments many public scientific websites are disabling comments on their articles. One such website is Popular Science which shut down their comment section in 2013 (Manella 2). Many scientists worry that if their comment section is filled with false statistics that seemingly debunk the contents of their article the general public will begin to distrust scientific findings. Disabling the comment section on articles also prevents a discourse about the article from occurring, which can be damaging to the advancement of ideas. Disabling comments isn’t the only way that scientific journals are fighting back against trolls. Many have begun to add paywalls to their articles, requiring any who wish to read them to pay an expensive subscription to the specific website. Considering that these articles are being posted on a countless number of sites, many of which have their own paywalls, using the Internet for scientific research can become extremely expensive. While part of the scientific community uses these methods to hide from trolls, others dedicate their time on the Internet to taking on these trolls. In fact, scientists are often “the first line of defense against trolls who want to take on science” (Manella 4). Statistics from a 2015 study show that “science distrusting people (who)…comment on science communities are below 1%, while around 10% of science trusting people…  comment on Facebook pages that host pseudo-science and fake news” (Manella 2). This positive ratio is encouraging as it shows an attempt by the scientific community to educate the communities that distrust widely accepted scientific theories.

When using the Internet always be vigilant for trolls. There are not many places you can go on the Internet without encountering a troll in some form or another. For your reference a flowchart has been put together showing you some options for dealing with a troll. 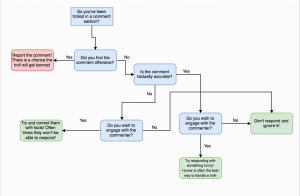 Hopefully this article was helpful in providing you with some useful information. However, if there is ever a doubt on how you should proceed with a troll, never fail to follow the age-old Internet adage, “don’t feed the troll.”

Phillips, Whitney. “Defining Terms: The Origins and Evolution of Subcultural Trolling.” This Is Why We Can’t Have Nice Things: Mapping the Relationship Between Online Trolling and Mainstream Culture, MIT Press, 2015.

Mannella, L. “Science and Social Media: How to Avoid Feeding the Troll and Save Your Time.” Acta Horticulturae, vol. 1144, 2016.